Battle of wits – Beliefs, Ideologies and Secret Agents in the 20th Century

Although this hook is the work of an historian, it seems more like a thriller. Its alternating settings are the USA, the Soviet Union and divided Europe. Its time frame is the second third of the 20th century, with particular emphasis on the end of the 1940s and the beginning of the 1950s. Its dramatis personae are post-modern antineroes, who at first take part as spectators in what seems to be an exciting political game, and are later allowed actively to participate with the proviso that they are not permitted to opt out of it, be it on moral grounds or if they come to realize its mortal danger. Those who attempt to do so end up on the death-list of the Soviet secret services. In Eastern and Central Europe heads rolled as a result of show-trials, but in the USA and Western Europe the Soviet secret services used different methods: there the mysterious cases of deaths proliferated. One victim accidentally fell out of his office window in the prime of his life, while another was executed with twelve gunshots on a highway in Geneva. In her earlier books, Diktatúrák ördögszekerén (The devilish tumbleweed of dictatorships) and Egyazon mércével (No double standards! – History reclaimed), Mária Schmidt has already demonstrated that the historian’s meticulousness is entirely compatible with asking bold questions and with a graphic and pleasing style that goes to the heart of the matter. Her work shows us that if someone, aware of palpable and obvious facts, does not re-evaluate his understanding of politics and history, he will sooner or later invalidate his own viewpoint. 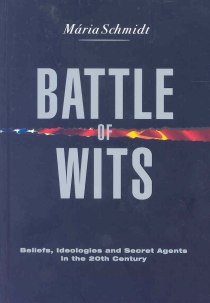